Chris Reid was 18 when he left Wellington to study wine science and viticulture in Hawke’s Bay. He then worked as a winemaker across France, the USA, Hawke’s Bay, Nelson and Martinborough, before setting up Reid Brothers Distilling with his brother, Stewart.

A big part of his desire to start a distillery was the lack of excitement he felt towards the domination of big marketing brands within the New Zealand spirits market.

“I felt there wasn’t any personality behind it.”

Reid’s approach to business and distilling is simple, to make drinks he wants to consume - and be honest.

The idea was formed in 2013, while working in Burgundy. Reid’s brother Stewart was working in Edinburgh as a renewable energy engineer. During a trip to Scotland, the brothers visited several gin distilleries.

“We were particularly excited by their creative use of local ingredients in contemporary gins.”

For Reid, a great spirit isn’t just what’s in the bottle. He enjoys a back story on who produced it, if they’re still running and where they are making it.

“My view is.. it needs to have personality to be great.”

Reid + Reid have been operating for seven years, growing from a hobby business, making gin in a 50m2 shed, to a full time business, selling to five different markets from a purpose built 300m2 distillery and bar. The brothers are proud to have done this without shareholders or crowd-funding.

In the distillery, working on his own, Reid likes to keep things as simple and efficient as possible. The space was designed to ensure there is room to grow. Reid + Reid recently invested in a new still and new packaging equipment, making production more efficient and granting Reid his weekends back.

The distillery site used to be a bar horse paddock, but in the past two years Reid has increased biodiversity, planting thousands of trees and plants. The company is also restoring wetland and planting trees and native bush to cover 2Ha of land at their vineyard.

Like all businesses, Reid + Reid was hit with supply chain issues due to the Covid-19 pandemic. They now purchase inventory a year in advance and in much higher quantities to ensure they don’t run out. This has been tough on cash flow but while the increase in costs hasn’t helped, Reid + Reid’s domestic sales have continued to rise.

Reid finds the most rewarding aspect of his job to be a simple compliment.

“While I make products to my own taste/styles, it’s always nice when someone says I love your gin.  It’s also exciting when friends who live overseas send pictures of our gin when they see it at a bar.” 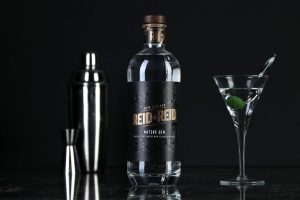 In the future, Reid is looking forward to getting the distillery bar back open and running for Spring. Using the new still, Reid + Reid will be releasing new styles of gin featuring botanicals from the distillery garden, and with borders reopening hopes to visit the export markets again.

Overseas distilleries have a price and a marketing advantage over New Zealand distilleries due to population sizes of their main markets and by the fact they are owned by large beverage corporations. Kiwis may be tempted to purchase cheaper overseas alternatives, but, without local support, distilleries will not be able to grow and pass on the cost savings of scaling up.

“Now is the time we need New Zealanders to support independent local distilleries.”

The Guild of Fine Food has announced that the World Cheese Awards will be held in the Spanish Principality of Asturias this year, taking…