Eagle Protect, with offices in New Zealand and the US, has been named a winner of the annual global Real Leaders Impact Awards. The annual awards recognise the world’s top impact companies who are leading the way in business as a force for good.

The judges selected 200 companies globally based on issues such as impact and business growth. Eagle Protect came in at 100, in their section alongside companies such as CVS, Moderna, and Johnson and Johnson to name a few. Multinational dairy company Danone was in first place with Tesla second.

Eagle Protect, the world’s only glove and clothing supplier to be B Corp certified, was found to be deserving of this honour by demonstrating best practices as an industry leader in reducing the company’s customer and environmental impact. 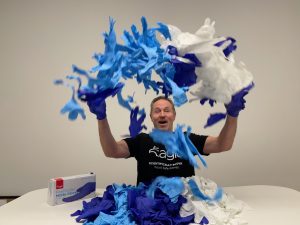 The judges were impressed with Eagle Project’s protective glove quality and sourcing standards. The global ranking of positive impact companies is at the forefront of driving social impact in major sectors of the economy.

The top 200 companies have a new vision of what the world should look like and who should benefit.

Ardagh, originally from Christchurch, said his company has been raising awareness of the risks associated with disposable gloves for 15 years and this has been amplified since the COVID-19 pandemic began.

“We are very excited to be amongst such iconic brands and take our spot in the middle of this group. There are many things we do to protect our customers and users. For one, we ensure our sourcing is ethical and responsible, and not from factories that employ forced labour or have poor labour practices.

“Over the last few years, the US Customs and Border Protection has banned imports from half a dozen major glove manufacturers, including the largest glove maker in the world, Top Glove. We know these manufacturers are consistent suppliers into the New Zealand food and medical sectors.

“The covid supply and demand deficit have introduced fraudulent, reject gloves into the food and medical industries, with obvious risks to wearers, patients, consumers and company brand reputation. In fact, There have been several instances in New Zealand recently of poor quality and reject gloves being used in the health system.”

New Zealand could also be the dumping place for gloves that have been banned from entry into the US due to labour violations. Surprisingly New Zealand seems to have no law against importing goods from overseas made under poor work conditions, and from companies charged with labour violations, said Ardagh.

“There is no doubt covid has increased the focus on hygiene and safety. Disposable gloves are a key factor in food borne illness protection and infection control in hospitals and their use is mandatory in most food establishments.”

Eagle Protect has operations in Christchurch and California.