Ready to get your sass on this season?

A new apple variety has been launched by Next Generation Apple, and Sassy is expected to be a major hit this season with its crisp texture and balance between zing and mild after-taste. 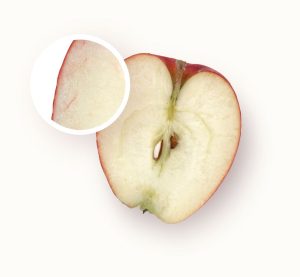 "Anthocyanins are a type of flavonoid, a class of compounds with antioxidant effects.

"Found naturally in a number of foods, anthocyanins are the pigments that give red, purple and blue plants their rich colouring.

"In addition to acting as antioxidants and fighting free radicals, anthocyanins may offer anti-inflammatory, anti-viral and anti-cancer benefits," said the Sassy apple website.

In this apple, the anthocyanin can be seen as the red outer colouring leeching into the white flesh. This particular feature intrigued consumers during focus group testing, who reported they liked the sweet and crunchy taste and the redness of the apple flesh.

Next Generation Apples, a collaboration between Taylors and Golden Bay Fruit, is drawing on their years of experience to bring this unique variety to market.

Small volumes grown in Nelson and Hawkes Bay will be available for sale at selected retailers in China and Vietnam and as samples for interested growers in 2022.

According to Stats NZ, tomato prices doubled in 2021, driving the highest annual food price increase in a decade. Ongoing labour shortages due to Covid-19 and…