This water can be reused in the process, and with a minimal amount of solid residue, which often include valuable by-products. It is particularly useful for industries producing complex wastes which are difficult to treat using traditional techniques.

One such industry is leather processing and tanning where animal skins are transferred into high quality fabric for use in footwear, upholstery, car interiors and other goods.

Based in Salinas near Alicante, Boxcapiel is one of Spain’s leading leather producers, processing skins from a range of species into high quality leather for a wide variety of end uses.

Tightening environmental legislation meant that Boxcapiel’s traditional waste disposal techniques were no longer acceptable or economic. The company urgently needed to find a sustainable and alternative waste treatment. Having been made aware of an existing HRS ZLD system in the locality, Boxcapiel asked HRS Heat Exchangers to investigate the feasibility of such a system at its own plant.

The effective design of any ZLD system is dependent on the correct analysis of the water/waste stream. It is essential to have accurate estimates of composition, flow rates, chemistry, etc. Without this, any designed solution will fail to deliver the required results.

The first step was therefore for HRS to commission laboratory studies of the waste stream, followed by the use of a pilot plant to test the proposed solution in situ at Boxcapiel.

Using this information, HRS engineers were then able to design the full ZLD evaporation system, based around the proven, patented HRS Unicus Series of reciprocating scraped surface heat exchangers. 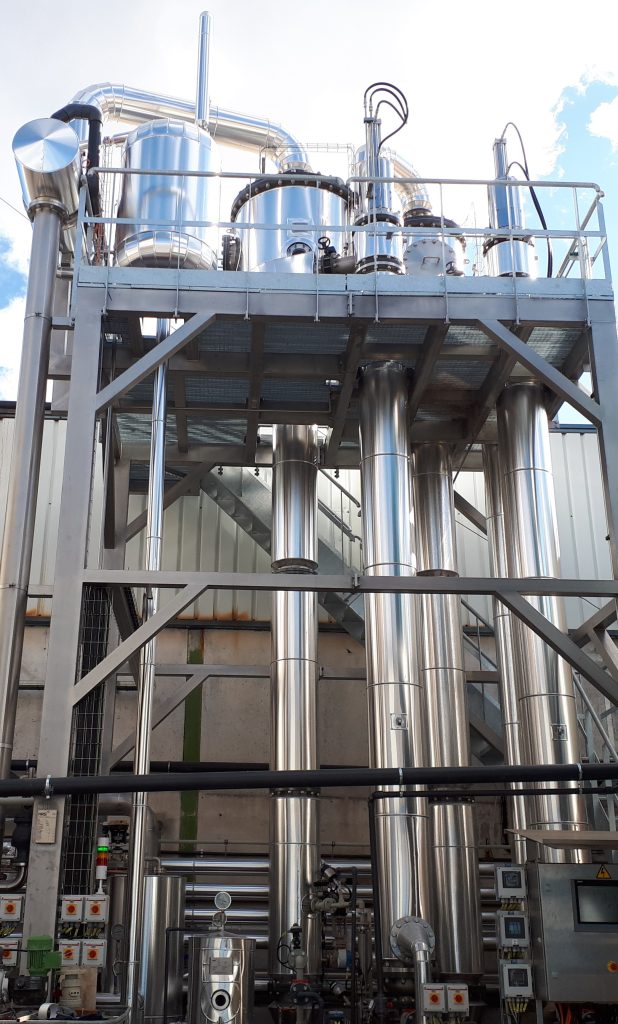 The ZLD system installed at Boxcapiel

Traditionally, vapour compression evaporation has been the main method employed for ZLD processing, with evaporation typically recovering around 95 per cent of wastewater as distillate. Any remaining concentrate is then further treated physically or chemically to produce solid residues (such as crystals) and water. Evaporators used in ZLD systems are often run at lower pressures in order to reduce the boiling point of the liquid being treated.

The HRS ZLD system supplied to Boxcapiel begins by using multi-effect evaporation to concentrate the waste stream, resulting in a solution which containing elevated salt levels very close to the saturation point.

This is then cooled to promote the formation of salt crystals. Further crystallisation then occurs in specially designed crystallisation tanks, with separation of the crystals that are formed. A supernatant layer of concentrated solution remains after this stage and is returned to the second evaporator for reprocessing.

Both the evaporation and cooling steps result in a high degree of material fouling on the inside of the equipment, so HRS Unicus Series scraped-surface evaporators are used to maintain thermal efficiency and remove fouling as it occurs in the evaporation process.

The result is an efficient process which can work continuously without requiring scheduled downtime.

The installed ZLD system produces clean water, which is utilised in the tanning process, and a solid residue, which can be disposed of via normal waste management channels, although Boxcapiel are keen to monetise this potentially valuable material.

The use of the HRS ZLD system has enabled Boxcapiel to meet increasingly stringent environmental regulations, improve the sustainability of its operations, and continue to operate profitability as one of the country’s leading manufacturers of quality leather materials.