The company, founded by James Henry Whittaker in Christchurch in 1896, posted on its social media saying it was necessary to increase prices to maintain quality ingredients.

"We wanted you to be first to know that from today we will, unfortunately, be bringing in a price increase," the social media post said.

"This is something we have resisted for the last two years, but over that time, our costs have steadily risen. Cutting those costs with lesser quality ingredients is never an option for us, as we hope you'll understand." 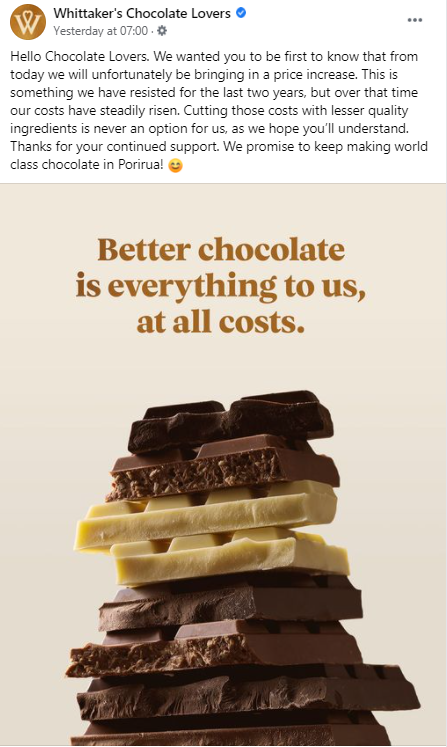 The last price increase for Whittaker's chocolate bars was in 2019, again due to increased production costs.

This most recent price increase comes amid growing concerns about inflation in New Zealand.

Inflation data released in July showed the Consumer Price Index was up 3.3 percent year-on-year. This was the most significant increase in nearly a decade and was driven by higher prices for housing and petrol, said StatsNZ.

Despite the news, many consumers responded to the post saying they understood and appreciated the honesty.

One comment said, "We completely understand that prices have to go up. Thanks for not hiding it in smaller packages or changing recipes. We are grateful for good quality New Zealand made."

Others were also happy to pay a little more so long as the recipes stayed the same, proving that consumers will continue to spend money on quality brands that they trust.