A Maine oyster farm has installed a new harvesting system that the owner said could help revolutionise the industry. 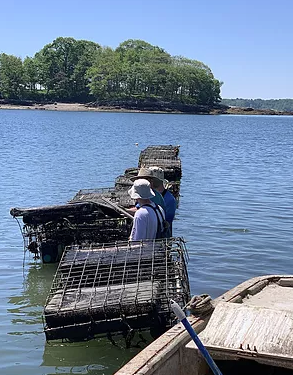 Butterfield said he discovered the 'flip system' while in New Zealand and is the first farm in Maine to use it. He said it would help oyster farmers with labour intensity.

This system allows farmers to stand upright and open the baskets without lifting because they are on a swivel. Farming oysters the traditional way involves a lot of heavy lifting. Each basket of oysters could weigh up to 45kg, and each one needs to be pulled out of the water, emptied and flipped.

The amount of labour involved in traditional farming is not sustainable for a small family farm, said Butterfield. But now, he can do in one hour what used to take him an entire day, allowing his farm to produce more oysters at a lower cost.

While his farm is currently the only one in Maine using this method, he hoped it would catch on.

Butterfield said most of Maine's oyster farms consider themselves a co-operative instead of competitors. Not only would he like to see them use the flip farm method, but he's willing to share.

Butterfield believed the flip system would allow him to increase sales from 90,000kg to more than 450,000kg in two years. This would generate more profits for his business and a cleaner Casco Bay.

In partnership with TechCollect NZ, a not-for-profit organisation committed to supporting product stewardship for electrical and electronic products in Aotearoa, Noel Leeming is trialling…