Catering perfectly to the (surely) very small demographic of people who have eaten mac and cheese and wondered what it would taste like as a creamy frozen dessert, food giant Kraft has unveiled its collaboration with New York ice creamery Van Leeuwen – a limited edition mac and cheese-flavoured ice cream.

The companies described the ice cream as a "cool, creamy scoop of ice cream that brings that comforting, nostalgic feeling from a warm bowl of Kraft Macaroni & Cheese." 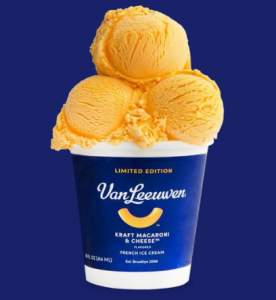 The flavour announcement left many on social media scratching their heads.

"It's not even April fools," one Instagram user wrote.

"I'll give that a hard pasta," said another.

"The cheese powder combines with Van Leeuwen's rich base, made with milk, cream, and sugar, to produce a buttery flavour that's only slightly cheesy," wrote McCarthy.

"It's one of those foods that's so uniquely compelling that you're going to be confused while eating it, but definitely won't want to stop."

This isn't the first time Kraft has released unusual flavours. For Valentine's Day, the brand came out with a hot pink, candy-flavoured mac and cheese. Back in 2020, the brand released a pumpkin spice macaroni and cheese that was made with cinnamon, nutmeg, allspice and ginger.

The Westpac McDermott Miller Consumer Confidence Index fell 7 points in March to a level of 92.1 as rising prices and Omicron concerns push…