“The FOPS design, led by Dr Stuart Tustin, was based on our understanding of plant physiology and developmental biology,” said Dr Jill Stanley, Science Group Leader at Plant & Food Research. “Theoretically we knew it was possible to increase the light captured by the canopy and that this would greatly increase productivity.”

In the FOPS system, the three-dimensional orchard design is replaced by a two-dimensional canopy with row spacing reduced to two metres. This intercepts more light and has more than doubled the yield of high-quality fruit. The design has other benefits too. It improves access, making orchard management simpler which will enable future innovations in automation and robotic picking. Apple orchards were used as the model system, but FOPS has also been adapted for pear, cherry and apricot orchard designs. 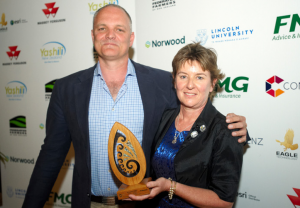 Plant & Food Research scientists were also recognised for their work as part of the Precision Seafood Harvesting Team, providing the science to underpin the commercialisation of a revolutionary sustainable fishing system.

The scientists originally designed and developed a prototype modular harvesting system based around the behavioural and physiological tolerances of fish. The system offers an alternative to traditional trawl nets and enables fish to swim throughout the capture process so that they are landed in the best possible condition on the fishing vessel.

The prototype was developed for commercial use through the Primary Growth Partnership Precision Seafood Harvesting Programme (PSH), a seven-year collaboration with fishing companies Sealord Group, Moana New Zealand and Sanford Ltd with co-funding from the Ministry for Primary Industries. The technology is now in commercial use and fish caught using this system will be marketed under the Tiaki brand, providing customers with assurances around the sustainability of their seafood.

In a move to keep up with current food and beverage trends, Harraways, New Zealand’s 154-year old oat brand, has revealed its plans to…