New technology that can extract the carbon from waste wood to use in greenhouses to help produce grow better is being trialled by a Lower Hutt tech company.

Carbon dioxide is used by commercial greenhouse growers to increase crop growth and production by up to 20 percent, most carbon emissions, however, are not clean enough to use safely on plants. It is hoped that the low-cost, renewable source of carbon dioxide will lead to reduced fossil fuel emission for the sector.

The company behind the technology, Hot Lime Labs, has taken years to perfect the process that extracts clean carbon dioxide from waste wood such as wood chips. The waste wood is burned to create gas, which is then absorbed into recyclable limestone pellets called ‘hot lime’.

As air is blown through them, the little balls release carbon dioxide into greenhouses, this heats the greenhouse and increases crop yields. 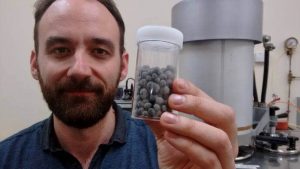 Gourmet Mōkai, a 4000-square-metre geothermal-heated commercial greenhouse facility near Taupō was the first place to trial the technology last year. The technology is being used on tomato crops but could be used on any crop grown in a greenhouse. The trial will end when the tomato crops come out of Mōkai later this year.

The first commercial-scale model, which is due to be fitted at Mōkai next year will be able to produce 2.5 tonnes of carbon dioxide a day. The units are modular and can be fitted as needed.

“There is a global trend towards greenhouse food production as producers looked to satisfy the growing demand for greener food with more intense food production per hectare that was resilient to climate change,” said Hot Lime Labs chief executive Vlatko Materic.

The lab is also looking at developing the use of crop waste and other organic source materials in its system.