The discovery of a highly-nutritious genetically modified purple tomato, like many research breakthroughs, happened by chance.

“The motivation for this started with my obsession with colors,” Dr. Cathie Martin, a plant biologist at the John Innes Centre in Norwich, United Kingdom, recalled during a recent Alliance for Science (AfS) Live webinar.

“My early research interest was to understand how plants produce and regulate their flower pigments.”

Martin began investigating anthocyanins — the pigments that give plants their characteristic red, purple and blue colours.

“I saw that purple colours were posed to be healthier. This observation led us to identify the key genes that synthesise and regulate anthocyanin biosynthesis in plants, using the genetic model Antirrhinum majus.”

The purple pigment is the result of the transfer of a gene from a snapdragon plant (Antirrhinum majus), explained webinar panelist Nathan Pumplin, president of Norfolk Healthy Produce, a subsidiary of Norfolk Plant Science, a company Martin co-founded to bring the purple tomato to market. It’s the first GM crop company in the UK.

“This snapdragon plant is edible,” he said. “Its introduction into the tomato caused them to accumulate anthocyanins in the fruits, making them turn purple.”

The purple tomato contains higher levels of anthocyanins — an antioxidant compound with the potential to help prevent cardiovascular diseases and fight cancer.

Anthocyanins also slow down the fruit’s rotting process and doubles its shelf life. “If we can reduce the amount of food waste, we will make a huge impact on feeding the world and reducing the carbon footprint from agriculture,” Pumplin added. 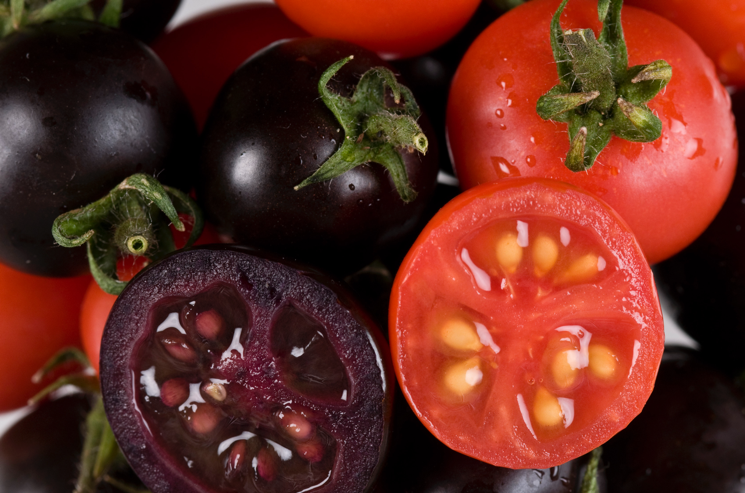 Anti-inflammatory properties are yet another benefit of the colourful fruit. Through a mouse feeding study, Martin and team found that the purple tomato can increase the lifespan of cancer-susceptible mice by 30 percent.

“It was after an in-depth reading of other studies on nutrition that I saw this number is incredible. We are yet to specifically test the impact of the purple tomato in humans. However, anthocyanins have been widely studied and shown to protect against various forms of chronic, diet-related, human diseases. We are optimistic that this will be the same result.”

Speaking on the regulatory and market potential of the purple tomato, panelist Eric Ward, co-CEO of Agbiome, couldn’t contain his excitement about the pending commercial release of the product.

“I am passionate about helping people see the value of modern biotechnology, and the purple tomato is a perfect product that would get consumers really excited about GMOs,” Ward said.

“We are hoping that consumers can access the tomato either as a juice or buy it fresh at the grocery store. Also, we hope to have the seeds available so that gardeners can grow it just like the normal heirlooms or beefsteak.”

Pumplin said they’re often asked why a purple tomato is needed when people could simply eat more blackberries to increase their anthocyanin intake.

“You’ll have to eat 70 grams of blackberries to get the same anthocyanin content found in just two GMO purple tomatoes,” Pumplin said.

“Surveys show that tomatoes are the most consumed vegetables/fruits in America, after potatoes. Instead of asking consumers to eat less of their favourite produce, why not give them the option for added nutrition?”

This tomato is currently awaiting regulatory approval for release by the United States Department of Agriculture. If approved for commercial sale, it will provide consumers with a colourful and highly nutritious option in the produce section.

Warning that more than 3 million cartons of fruit will go to waste, fruit growers are desperately seeking a Pacific bubble for workers. Weeks…