Westridge Farm owner Mark Anderson has been wintering his cows on a checkerboard of pasture and hay bales to improve the health of his soil.

Anderson has been using the system for the last three winters on about 60ha of his 580ha dairy farm in Waiwera South. 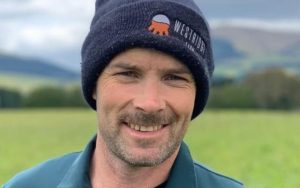 In March, paddocks used for bale grazing were closed to stock to allow the pasture to grow, and in June, bales were laid in a checkerboard pattern sectioned off with 10 breaks.

Then, up to 110 of Andersons 700 cows graze on the hay and pasture on a break for three days before moving on to the next for another three days.

When the cows move on, there is up to 20 percent of hay bale residue left in the paddock.

If there was a bout of extreme weather, some of the cows would be returned to previously grazed breaks, giving the cows more space, limiting soil damage and giving them a space to rest on hay residue.

Anderson said he learned about the system by listening to podcasts and reading international research.

Each year, he places the bales in different positions within the checkerboard pattern, so more soil gets the benefits.

Anderson introduced the system to reduce sediment and nutrient loss; improve animal welfare; make it easier for staff to manage stock in winter, and to keep the cows' diet static.

One benefit of bale grazing is it doesn't require a change in a cow’s diet, whereas a cow's gut bacteria need to change when moving from a pasture diet to a winter crop.

A bale grazing diet still provides variety, as the pasture could include grass and clover, but the hay could be a mix of grasses and herbs.

If a cow got beyond a break on a winter crop such as fodder beet, they could over-eat and damage their gut health. As cows cannot overeat on pasture, this stress is removed.

By removing the need to plough a paddock to resow it after winter, bale grazing maintains carbon in the soil and its water retention abilities.

Spring is a busy time for farmers, and it is nice not to be stuck to a tractor preparing next year's crops, said Anderson.

Since implementing the system, Anderson's cows were more content during winter than they had on their fodder beet and kale diets and were healthier.

The hay residue creates a chain of effects. The residue acts as a mulch and improves the health of the soil; healthy soil grows taller pasture with deeper roots; deeper roots allow heavy rain to enter the soil. Tilled soil could become slushy after heavy rain, and short grass could go to seed early, which is reduced by the moisture retained in the hay residue.

Anderson used a penetrometer to test the soil compaction of a paddock he had wintered cows using bale grazing in 2020, and results showed it was looser where bales had been placed, indicating it was healthier.

Some University of Otago students had taken a soil sample below hay residue and discovered 125 worms in it.

Anderson's farm was considered for the AgResearch Soil Armour Project, but his soil type didn't suit the nitrate measuring technology.

Anderson shared his system with Freedom Acres Ltd, which has joined the project.

Every year, Euromonitor International identifies emerging and fast-moving trends that are expected to gain traction in the year ahead. These trends provide insight into…