When it comes to dog food, Radical Dog could be the pick of the crop.

The dog biscuits are made from Montmorency tart cherries and were created by John and Maureen Newlands of Incholme.

In the late 1980s, the couple considered options for integrating something into the farming business that used their irrigation more efficiently whilst growing something high yielding and profitable within a small land area.

Whatever they grew had to be healthy, mechanically harvested and with demand, said Mr Newlands.

Husband and wife spent hours creating lists of ideas and years trialling them. Montmorency cherries eventually came out on top, and the Newlands created Cherryvite.

The cherries were stocked in many high-end supermarkets, but the Newlands found educating New Zealanders about the health benefits of tart cherries was difficult.

Everyone knew about sweet cherries, which are sweet with little goodness, whereas tart cherries are bitter but packed full of goodness, said Mr Newlands.

The Newlands tapped into a niche market of Eastern Europeans in New Zealand, especially Christchurch, as cherries were part of their staple diet. 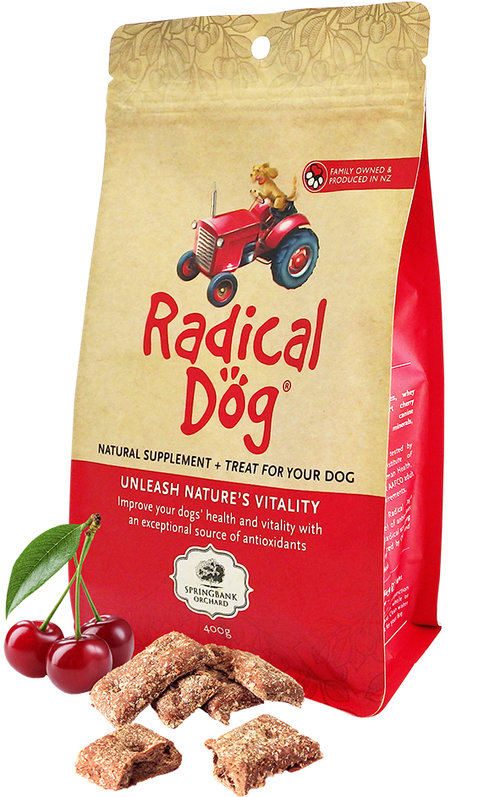 Unfortunately, like many others, they lost most of their business with the earthquakes.

Meanwhile, the New Zealand beer industry was experimenting with tart cherries after the success of sour beers overseas. They consumed everything we had, said Mr Newlands.

The farm dogs and pets would go with the Newlands to pick cherries. It took a year before they realised the dogs had been scoffing the cherries and looked better for it.

They talked to companion breeders to gauge the interest in dog biscuits made from cherries. They were interested, provided the dogs would eat them, Mr Newlands said.

Creating the biscuits was a bumping road, with animal nutritionists telling them they couldn't put fruit in dog biscuits. But eventually, someone was willing to help.

The next couple of years was spent perfecting the product, with many batches sent to Massey University for testing. Once the right recipe was found, a factory was built on the farm.

The next step was to market the product. The year of the launch, hundreds upon hundreds of samples were given out at the Wanaka A&P Show, but there was very little response. It was an expensive publicity stunt which didn't pay back, said Mr Newlands.

Production was slow until Country Calendar knocked on the door.

Filming lasted four days, with the crew coming for the spring blossom and summer harvest. The show aired in April 2017.

From there on, business was booming.

On the website, there is a place to choose "where did you hear about us," and 50 percent is still probably Country Calendar, said Mr Newlands.

There was still work to be done, but they spent less time chasing new customers as time went on, and now customers come to them, said Mr Newlands.

Foodstuffs stocked Radical Dog in supermarkets South Island-wide, and they were looking at expanding into the North Island.

The product was not only a treat but also suitable as a complete food and supplement with high natural antioxidants, said Mr Newlands. It was accredited by the American Association of Feed Controls as well.

Due to a range of disruptions, from a 10-day pandemic lockdown in Malaysia to civil unrest in South Africa, all of Kellogg’s 50+ factories…