Under an internationally brokered deal to unblock the country's agricultural exports and ease the growing global food crisis, the first ship carrying Ukrainian grain has set out from the port of Odesa.

The Sierra Leone-flagged cargo ship Razoni sounded its horn as it slowly departed with over 26,000 tons of corn destined for Lebanon. 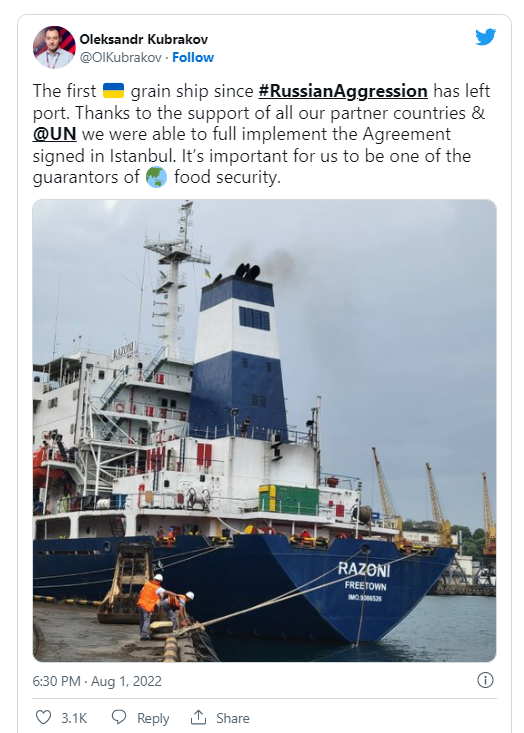 Russia and Ukraine signed agreements in Istanbul with Turkey and the UN on July 22, clearing the way for Ukraine to export 22 million tons of grain and other agricultural products that have been stuck in Black Sea ports because of Russia's invasion more than five months ago. The deals also allow Russia to export grain and fertiliser.

As part of the agreements, safe corridors through the mined waters outside Ukraine's ports were established.

In Moscow, Kremlin spokesman Dmitry Peskov hailed the ship's departure as "very positive," saying it would help test the "efficiency of the mechanisms that were agreed to during the talks in Istanbul."

Under the agreements, ships going in and out of Ukrainian ports will be subject to inspection to make sure that incoming vessels are not carrying weapons and that outgoing ones are bearing only grain, fertiliser or related food items, not any other commodities.

The Razoni was expected to dock early tomorrow in Istanbul, where teams of Russian, Ukrainian, Turkish and UN officials were set to board it for inspection.

More ships are expected to leave from Ukraine's ports through the safe corridors. At Odesa, 16 more vessels, all blocked since Russia's invasion on February 24, were waiting their turn, with others to follow, Ukrainian authorities said.

Some shipping companies are not yet rushing to export food across the Black Sea, however, as they assess the danger of mines and the risk of Russian rockets hitting grain warehouses and ports.

The first calves bred for the Beef + Lamb NZ Genetics Informing NZ Beef (INZB) project, a seven-year programme supported by the Ministry for…