Mount Pack & Cool’s Stage 4 expansion is ready to start packing this season's kiwifruit after being completed on time, on budget and on spec, expressed Managing Director Brendon Lee.

“We’ve taken growers through the building, and they can see how the investment will benefit them through cost-savings in top-of-the-line, labour-saving technology," he said.

“Not only are we creating a safer and more enjoyable work environment for staff, but we have the capacity to pack growers' fruit when they need it at harvest time, optimise their packouts and deliver the best financial returns.”

The investment gives Mount Pack & Cool the capacity to handle 24 million trays of Class 1 kiwifruit across its total site. 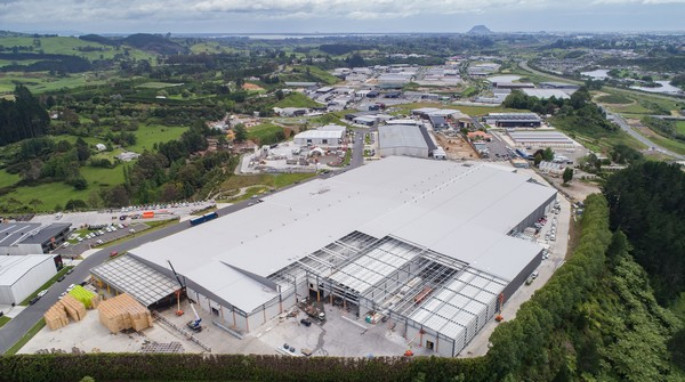 Temperature and humidity will be carefully controlled inside the packhouse to preserve the fruit quality as it moves through the facility and out of CA environment, ensuring there’s no humidity or sweating on the fruit, extending its shelf life.

Other features built into the development include the first ‘TOMRA 5S Advanced’ packing line from Compac to be installed in New Zealand. With the latest spectrum grading technology, it delivers highly accurate grading results to optimise the sorting of fruit for export and
growers’ packouts.’

“We’re excited to be the first packhouse in New Zealand to be operating this machinery, which was designed to be more user-friendly and easier to clean and service, resulting in less downtime,” continued Brendon.

Its new coolstores will feature the new Atlas 3.0 pallet shuttle system from Belgium.

Brendon said the ATX tray making and ATS tray stacking machines in both packhouses will reducing the need for labour by 50 percent.

For a couple of weeks in early March, it will also pack about 20,000 trays of Zespri’s new RubyRed kiwifruit.

Milk is a staple, it’s a tasty beverage and key ingredient in many recipes, and now, from a dash in coffee to a glass…