What the company calls its New Meat range comprises of plant-based beef and lamb flank cuts, as well as ‘culinary-grade’ ground beef, sausages, premium burgers and lamb kebabs. The products are now available in high-end restaurants in the UK, Germany, the Netherlands and Italy, with various Michelin-star chefs endorsing the level of quality achieved.

The decision to launch in high-end restaurants was a strategic one. The company believes this the best way to profile what it says was previously though technically impossible – the creation of plant-based whole cuts that deliver a texture and mouthfeel that echoes that of animal-based meat.

The London launch event was staged at Mr White’s, Marco Pierre White’s restaurant in Leicester Square and was attended by chefs, retail buyers, investors and select media. A retail launch and expansion into additional markets are on the agenda for this year.

“We’ve achieved a level of superiority in taste and texture that surprised even some of the most recognised chefs in the world and out unique technological capabilities enable us to replace every part of the cow for the first time,” noted Redefine Meat co-founder and CEO, Eschar Ben-Shitrit.

“By continuing our close collaboration with the top-tier culinary world, we will accelerate our product rollout in the coming months.”

The menu put together by White consisted of classically inspired dishes like Redefine beef mince Bolognese with gnocchi and Redefine port sausage imam bayaldi with Greek yoghurt and coriander. 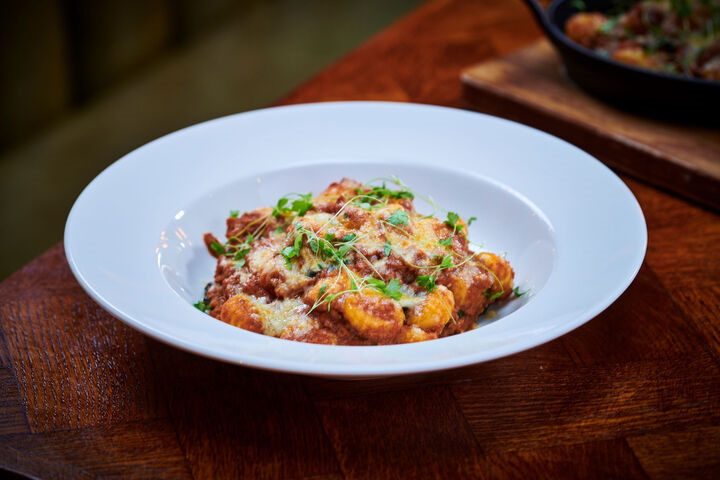 So, What was Marco Pierre White’s Verdict?

“It’s just extraordinary. It’s the first time I ever worked with it, I just thought, wow,” said White.

“First of all, I cook it in the sous vide bag, so the heat goes into in gently. Then I take it out of the bag, dry it, season it, then I cook it on the blancher,” explained White.

“It’s about delivering consistency because it’s not like a piece of meat where some people want it blue, some people want it medium rare etc. With it being plant-based, there is only one way of serving it. Therefore, I cook it at 64 degrees Celsius to start, then I put the caramelisation onto it afterwards.”

While White notes that there are some distinctions between how he can treat Redefine’s plant-based meat alternative and animal meat, he said that the techniques he opted for are nevertheless common approaches to cooking beef and lamb.

Sampling White’s menu, the signposting for what Redefine’s New Meat was expected to deliver was clear. Beef alternatives were paired with red wine reductions, lamb analogies were served alongside peas and mint. Classic pairings establish an expectation in the mind of the diner, but would Redefine’s product stand-up without this signalling? 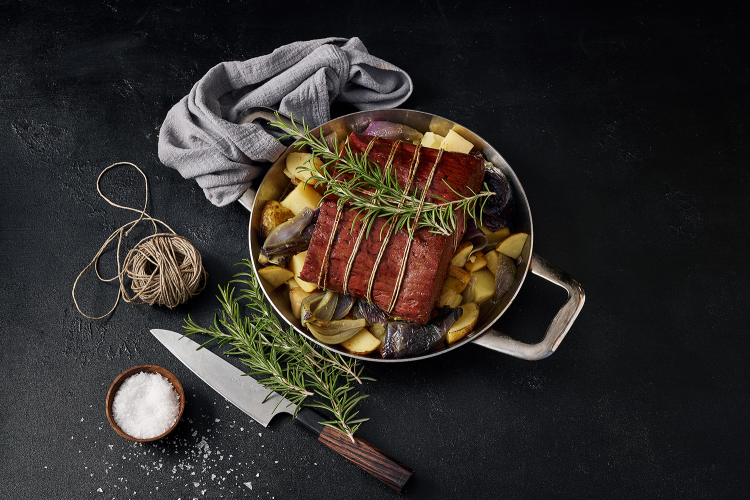 White believes it would. He explained that Redefine Meat has leveraged its technology to overcome one of the greatest challenges facing formulators eyeing whole cuts – mimicking the texture of meat. Redefine has achieved two distinct texture for its lab and beef cuts with White observing, “The lamb is softer than the beef, which it should be.”

The way that fat is distributed through the cut is important because it gives food and drink products particular sensory characteristics. Fats perform a number of functional roles, acting as texturisers, lubricants and aroma carriers. But animal and plant-based fats behave very differently.

According to White, he did not find this an issue when cooking with Redefine’s New Meat products.

White believes that the concept, which has already been taken up by early adopters in Israel and Europe, will prove a big hit in fine dining establishments worldwide.

“It’s a game changer and it is here to stay. In the world that we live in, it is an extraordinary product.”