University of Waikato researchers have discovered microplastics in extremely high levels across the Bay of Plenty moana with sediment and shellfish found full of tiny plastic particles.

The discovery comes as the government announced it would move to ban some plastic products by 2025.

Master of Science student, Anita Lewis, presented findings of her research at the New Zealand Marine Sciences Society Conference held at the University of Waikato’s Tauranga campus this week.

Tiny plastic particles were found in every sediment sample she took from across the region, between Tauranga Harbour and the eastern coast to Maketu and Ōpōtiki. There was not one area sampled where microplastics were not present and particularly high levels were found in shellfish, including Tuatua, Cockles and Wedge Shells.

Environment Minister David Parker announced last week from late 2022 PVC meat trays, polystyrene takeaway packaging and degradable plastic products will not be allowed and by mid-2025 all other PVC and polystyrene food and drink packaging will be outlawed.

Lewis, who received a $23,000 Tauranga Campus Research Masters Scholarship to fund her study, said her research findings were alarming, illustrating the impact plastics were having not only on our marine environment but potentially human health. 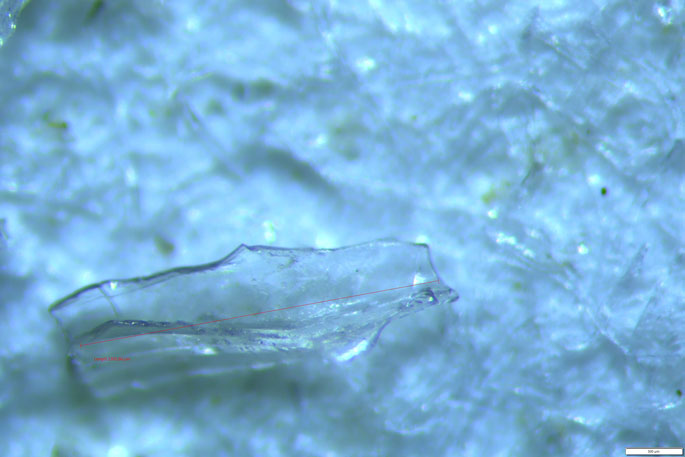 A plastic fragment under the microscope

“Kaimoana (seafood) gathering in New Zealand is common practice and this research is showing microplastics and nano-plastics are now bioaccumulating in our food chain.”

She said banning single-use plastics is an important step, but more research is needed to understand the problem. Her work is one of only three pieces of research undertaken on microplastics in New Zealand.

The highest density of microplastic particles (up to 11087.9 per m2) was observed at sites that are close to municipal outfalls and populated areas.

Lewis explained that many microplastics enter the marine environment via treated wastewater.

“While filtering large pieces of plastic, the membranes in the treatment plants also act like abrasives on small microplastics, making them even smaller and turning them into nano-plastics as they go through the system,” she said.

Along with banning single-use plastics she said more work could be done including investigating the use of different filters in household washing machines and investigating different types of membranes for use in wastewater treatment plants.

More than 400 scientists, iwi, and marine environmental stakeholders from universities, Crown Research Institutes and organisations have gathered at the conference this week to discuss how New Zealand can protect and sustainably harness the economic potential of our marine environment.

Denmark has failed to fulfil its obligations under EU law by continuing to sell feta cheese to third countries, according to the European Court…