According to research from CIRAD, a French agricultural research centre, and the Royal Botanic Garden in Kew, the coffee sector can look to forgotten wild coffee species to mitigate the global impact of climate change. Coffee giants such as Jacobs Douwe Egberts, Nespresso and Starbucks are sniffing out their potential.

While robusta and arabica make up more than 99 percent of all coffee production, there are more than 120 other species that have been identified within the Coffea genus. The flip side of the success of species like Robusta, which started to emerge as a dominant variety in the early 1900s, was that lesser-known coffee species were increasingly abandoned and forgotten.

Recently there has been a renewed interest in such species. Climate change poses a significant threat to coffee farmers worldwide and Robusta’s dominance is under threat. Scientists predict that as much as 60 percent of land used for cultivation of the current coffee species could be affected by climate change by 2050. 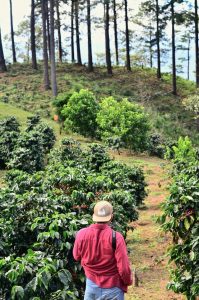 Other species, whether wild or cultivated, may offer resilience to climate change or the potential to counter specific pests and diseases, and as the specialty coffee sector grows, there is increasing curiosity in exploring lesser-known species in a quest to find new sensory experiences.

CIRAD has been working with the Royal Botanic Gardens in Kew, UK to identify the most promising wild coffee species. Researchers have focused their efforts on three Coffea species that are relatively unknown: stenophylla, brevipes and congensis. These are of interest because of historical reports of a superior taste, but also because they are found in Upper West Africa at relatively low elevations, suggesting the potential for climate resilience.

“These attributes would be best accessed via breeding programs, although the species may have niche-market potential via minimal domestication.”

In December, 15 experts gathered at CIRAD’s sensory analysis laboratory, with four more virtual attendees from Switzerland, the Netherlands and Belgium to taste the three species together, representing a world first. The tasters represented companies including Nespresso and Starbucks with their primary aim to decide whether these forgotten species have a place in today’s global marketplace.

All tasters agreed that it was a historic moment in the journey to find new coffee varieties with the potential for each of the coffee species to be grown independently or crossed with other species, such as Robusta, to create new, more robust and higher-yielding varieties.